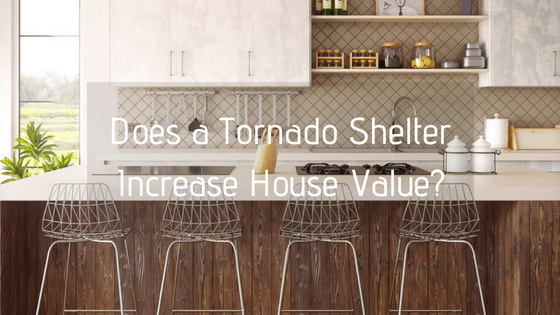 No matter where on the planet someone may be, the threat of severe inclement weather exists. When it comes to the residents of Texas, one of those potential threats involves tornadoes that can strike with deadly quickness and leave a trail of death and destruction in their eventual wake.

One of the ways that individuals and their families can stay safe is by investing in a tornado shelter. While some of those that could find themselves in the path of a hurricane may be reluctant to make that sort of investment, there’s one reality that they appear to be overlooking. That involves the simple fact that adding this to a home will most likely result in an increase in house value.

Listed below are some of the reasons why a tornado shelter can accomplish that goal:

Over the past few decades, the number of violent tornadoes and other natural disasters have taken a dramatic surge from previous eras. With visual proof of what exactly a tornado can do and Texas often serving as a focal point for such disasters, home buyers are more concerned than ever about protecting themselves in the midst of such potential disasters.

That means that many are putting a higher priority on finding a home with a shelter that will help protect their family. By having one already in place, the prospect of getting the best possible price for your home is enhanced and certainly offers a more positive contrast to other homes those buyers may be looking at during their search.

One of the chief reasons that house value will rise under these circumstances is connected to the peace of mind that’s achieved with having a shelter available nearby. When it comes to tornadoes, this type of weather disaster can come either without warning or within such a short time frame that getting away from it is virtually impossible.

With a shelter on the premises, a family can quickly reach the structure and be given the type of protection that will serve as a welcoming cocoon. That type of security is something that no family can put a price on, which is why they’ll see more value when it comes to the home’s value. The fact that it won’t contribute to an addition in the area of property taxes is also a winning proposition.

Adding Versatility to a Home

Since this type of shelter will only be necessary in dangerous situations, it offers a homeowner the chance to use it as a potential storage room when not in use. Having a similar room built would be prohibitively expensive, but the cost for this can be cut in half, thanks to a FEMA rebate.

So how does that tie into increased home value? That versatile addition provides both protection and added space. That results in the final price that can be achieved likely making up for the remaining half of the original investment for that room. In short, the payback is worth making the effort.

Everyone that owns a home wants to know that their investment was a wise one and that they’ve taken the proper steps when it comes to increasing the house value. By having a tornado shelter built by Lone Star Safe Rooms, your decision will bring about a structure that’s well-built and comes with a lifetime warranty.

So if you’re interested in building on to what you already have and staying protected in the process, contact us at Lone Star Safe Rooms. You’ll have experienced builders handling the work, bolstering the trust level.